New technologies are evolving faster and faster. Multi-device integration, streamlining production processes and overriding control is a priority in Industry 4.0. This idea was created as a response to China’s strong development in the field of innovation. The basic principles of Industry 4.0 are the use of artificial intelligence, advanced data processing and human collaboration to increase production efficiency and minimize losses.

As part of the Future Industry Competence Center project in 2019, Alnea designed and built the Demonstrator Factory of the Future. Such a project requires interdisciplinary knowledge, knowledge of many technologies in the field of robotics, automation, mechanics and IT solutions.

At Alnea, we already have a whole stable of robots that we pride ourselves on. They are usually useful for production tests. Our customers very often send us inquiries about technological possibilities. We perform technological tests on products – gluing, soldering, scanning, video inspection, gluing, applying paste, sealing, welding and others. 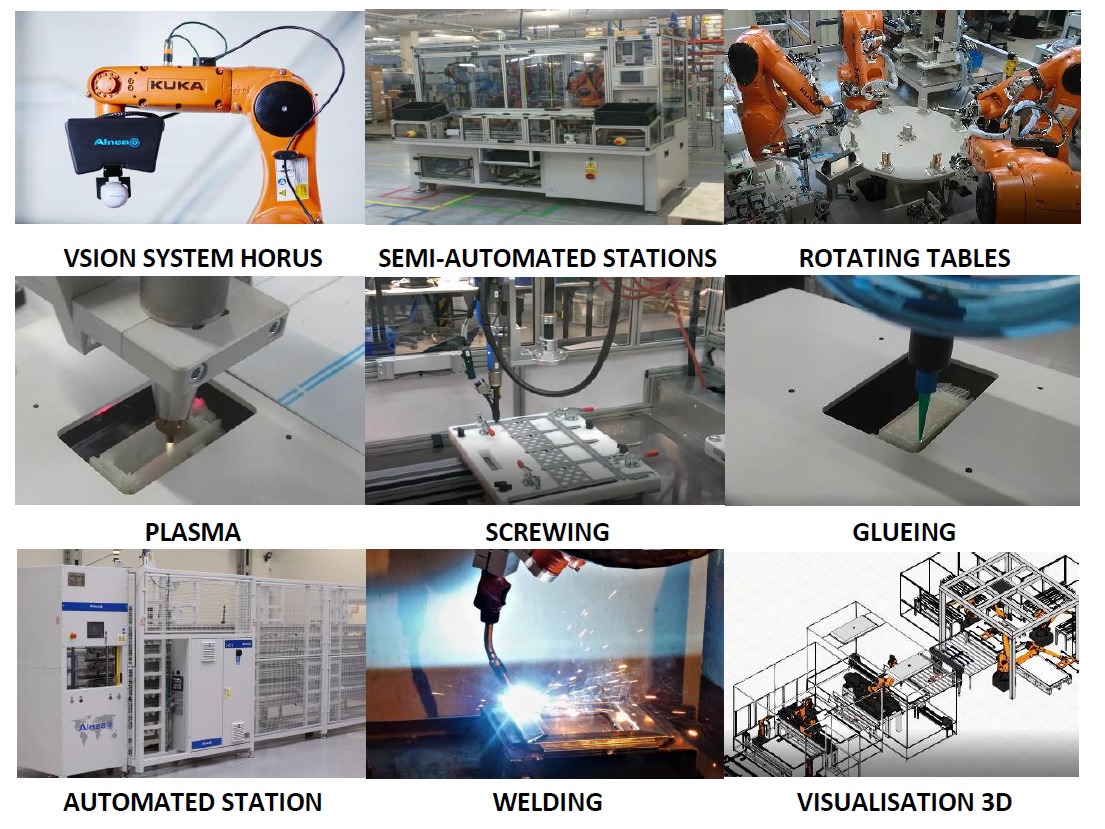 KUKA KR6 R900-2 – a great robot with long range and good payload. It is ideal for applications with our video system because we use the entire arm range to receive a scan of a large working area

Kuka KR6 R700-2 – nevertheless than the previous one – an excellent robot for testing or e.g. assembly. Used in this application due to the smaller range dictated by the small cell to which we put it.

OMRON LD-60 – AGV – autonomous mobile robot with a payload of 60 kg. For the transport of electronics – just in time.

SMT OV1385 Renex TWS AUTOMATION – SMT line for automatic surface installation is a great example of how you can integrate the cooperation of many machines.

The implementation of the process chain in Our Demonstrator’s Factory 4.0 started with the Fanuc CR7iA robot. He downloaded the PCB and put it on an AGV mobile robot with a customized body. The robot then transported the plate to the SMT line, where the electronic components were surface-mounted. After sintering in the furnace, the plate was moved to a specially added frame on which two KUKA robots were mounted. 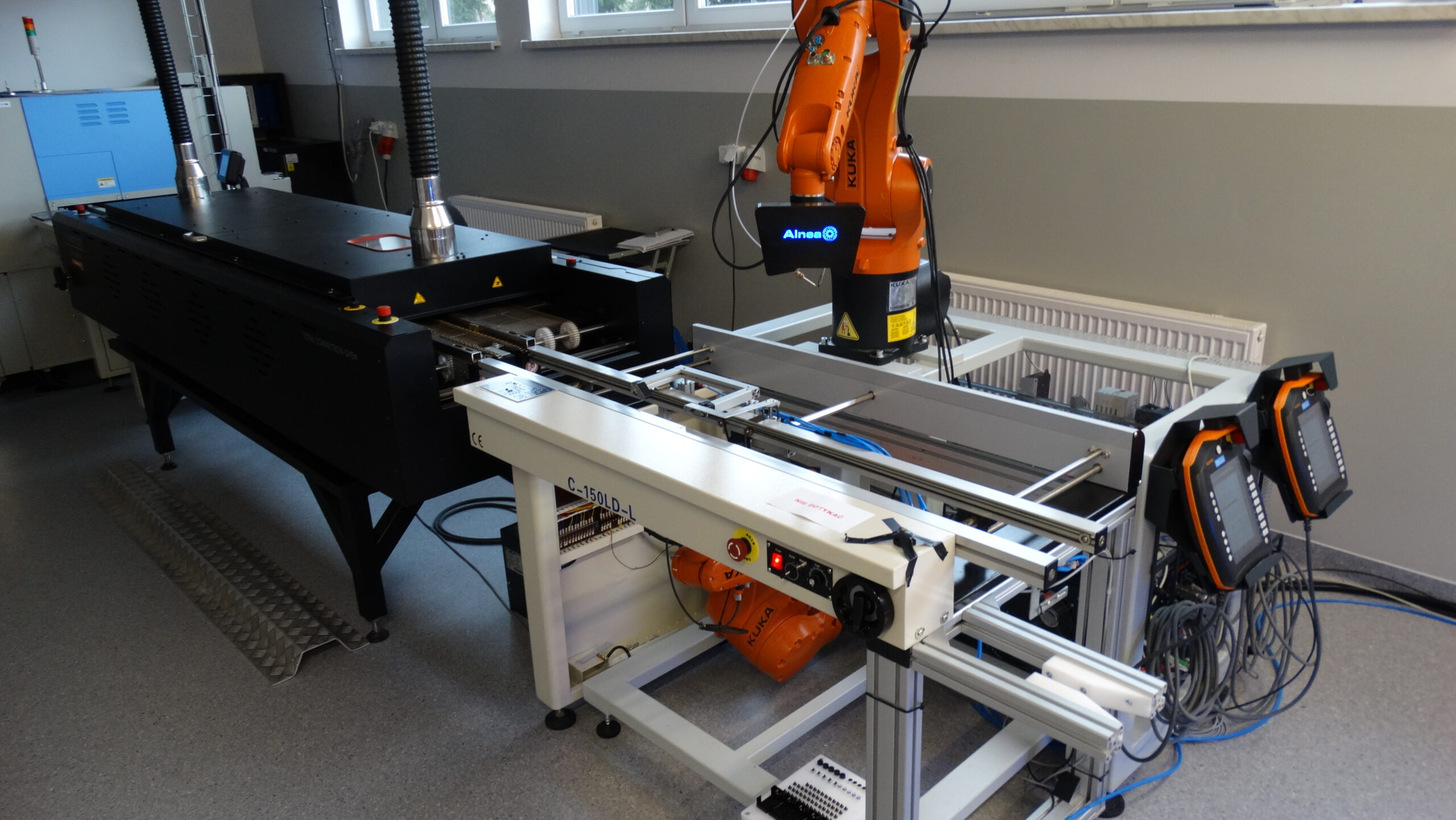 The first robot was equipped with a Zeus soldering  kit and a Horus vision system. The video system is also a 3D scanner – it checked the board and then sent it to the second robot under the worktop coordinates. The THT (Trough Hole Technology) technique assumes that the through-hole elements are on one side of the plate and the soldering field on the opposite side. The second robot mounted the elements “from below”, while the robot with the video system soldered them “from above”. After the inspection scan, the plate lowered the production line.

The Industry 4.0 demonstrator served as a model for many cloud computing technologies. The entire mini-factory was hooked up to a top-down management system associated with the database. Additionally, production could be initiated remotely. The camera located in the corner of the demonstration room allowed you to remotely track all production processes. 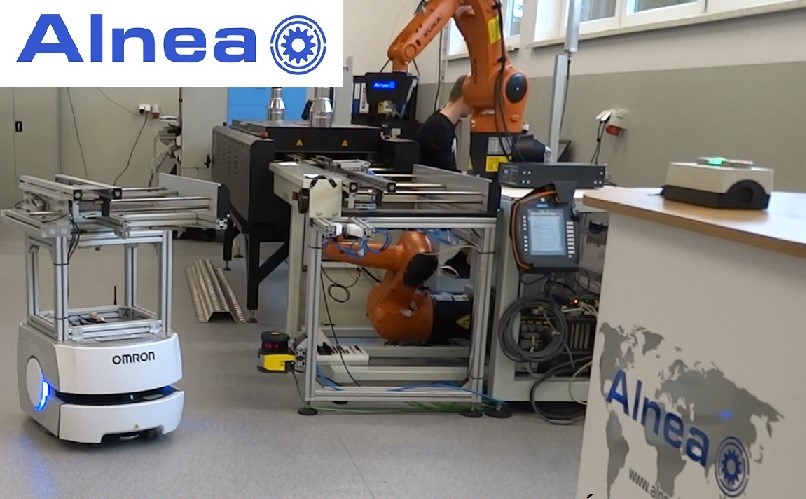 Automation and robotization of production processes

Automation and robotization of production processes is now a desirable development direction for companies that want to stabilize production, also due to a pandemic. Alnea has many years of experience in designing and building new machines for industry. We also create:

Automation of production processes was implemented by us in such industries as automotive, electronics, construction and intermediate industries. We encourage you to contact our automation and industry 4.0 experts.

Construction industry can be also automatised! If you want to receive an offer for a robotized position - write to us! biuro@alnea.pl