The pandemic could not have been foreseen. It is also difficult to protect yourself against such chaos. However, we continue our work. We keep the rules of safe distance between employees. Smell of decontamination gel is everywhere, but we will not give in to the virus.

We continue our projects, although in some cases we hear “Thank you for the offer, but it’s already a frozen project.” It is hardly surprising because the hard days are coming. But we are fighting for our jobs, for the local market and our economy. High-flying maybe, but it’s true that at the present time everyone will lose. Prosperity was already there, now you have to work harder, not to earn more, but to keep what we have. At least lose as little as possible.

Quarantine, limitations, closed boundaries – all this means changes are coming. It is not known how long it will last. Fortunately, however, there are companies that know that automation is important after all. This time can be used for … changes. Analysis of processes, delivery system, products. One of our customers just ordered a copy of a semi-automatic line. About the similar line, read HERE. 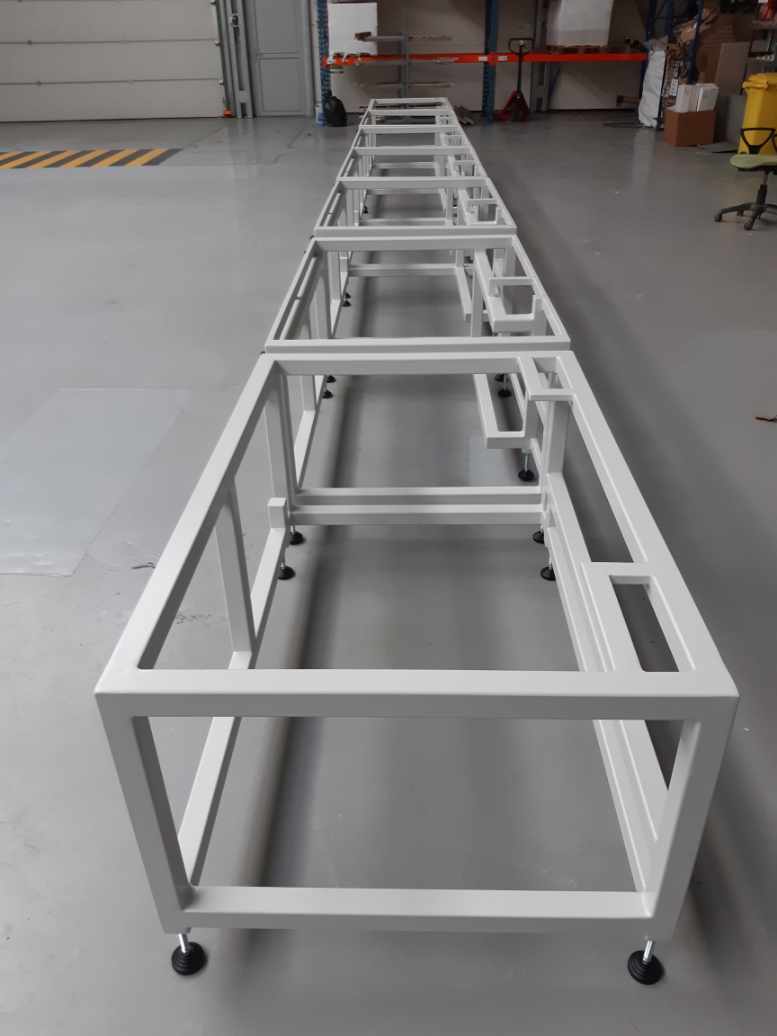 A new assembly line is already being built in our hall. We rarely make copies of our applications. Nevertheless, we like such tasks and there is always room for improvement, addition and improvement.

Welded profiles returned from the paint shop. Electrical cabinet is waiting for sewing. Our court master electrician has completed the gadgets and will begin to work intricately tomorrow. The line must be equipped with a conveyor, drives, motor and covers. Elevators for passage and return of pallets for stands for mounting lamps will be installed on both ends. And of course, safeguards, which are not important in production, are the most important from the employee’s perspective. 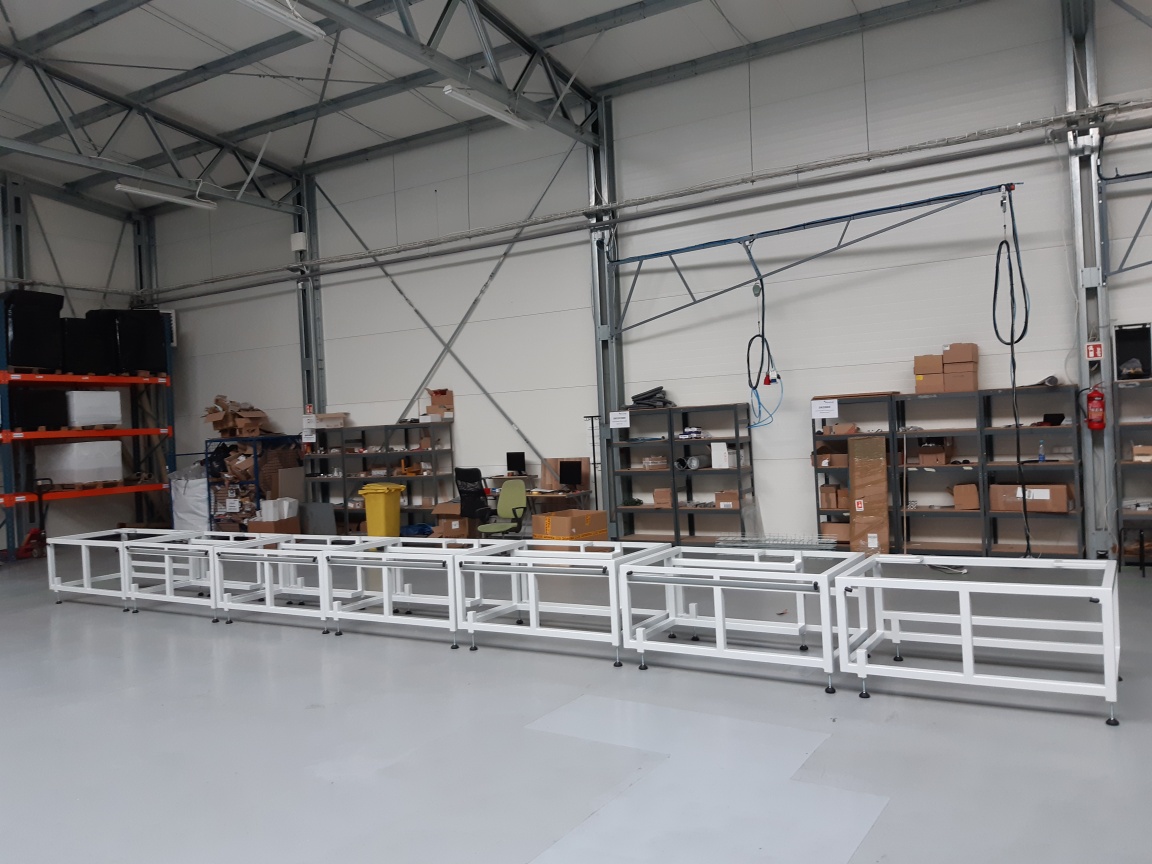 Automation is our passion.

This production line design is extremely successful. In the end automation is our passion! Simple to operate, easy to use, optimal in terms of costs. Our line can be easily maintained and inspected. We use standard solutions, so spare parts are easily available. 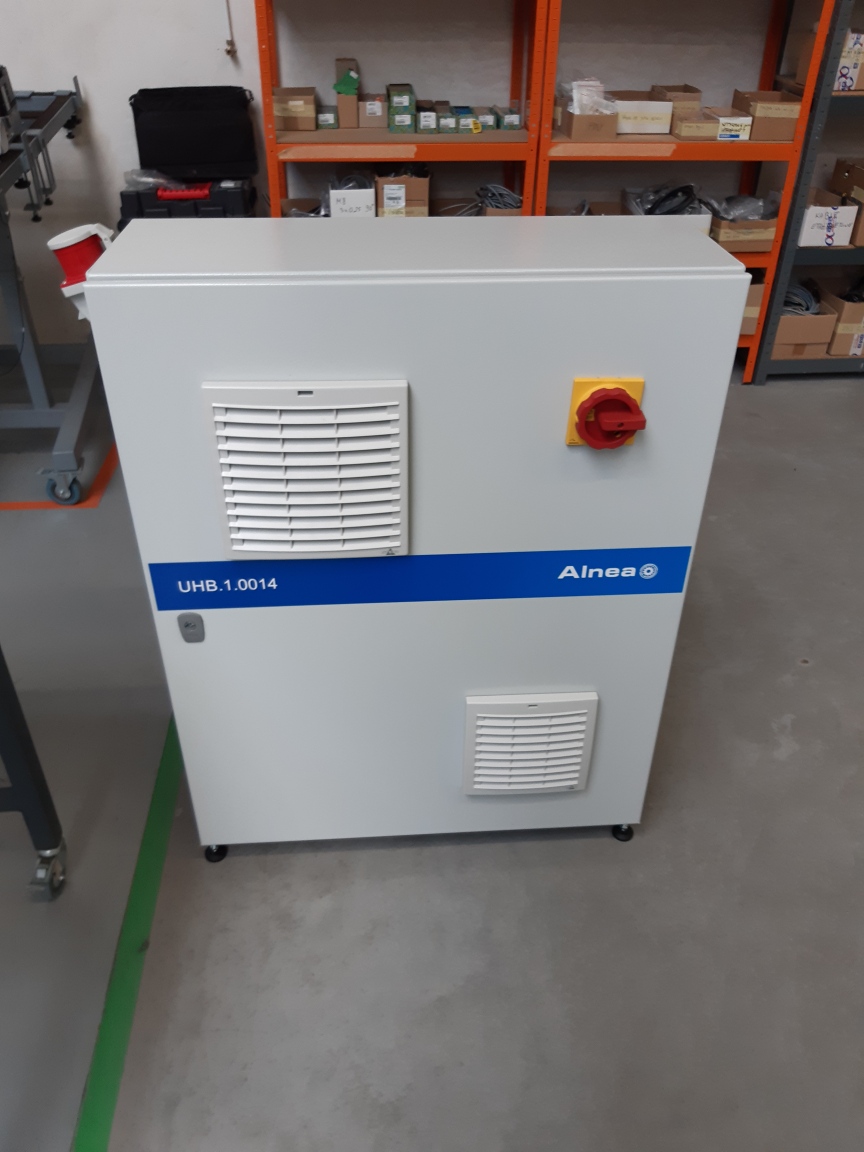 And so the line will look similar after assembly. 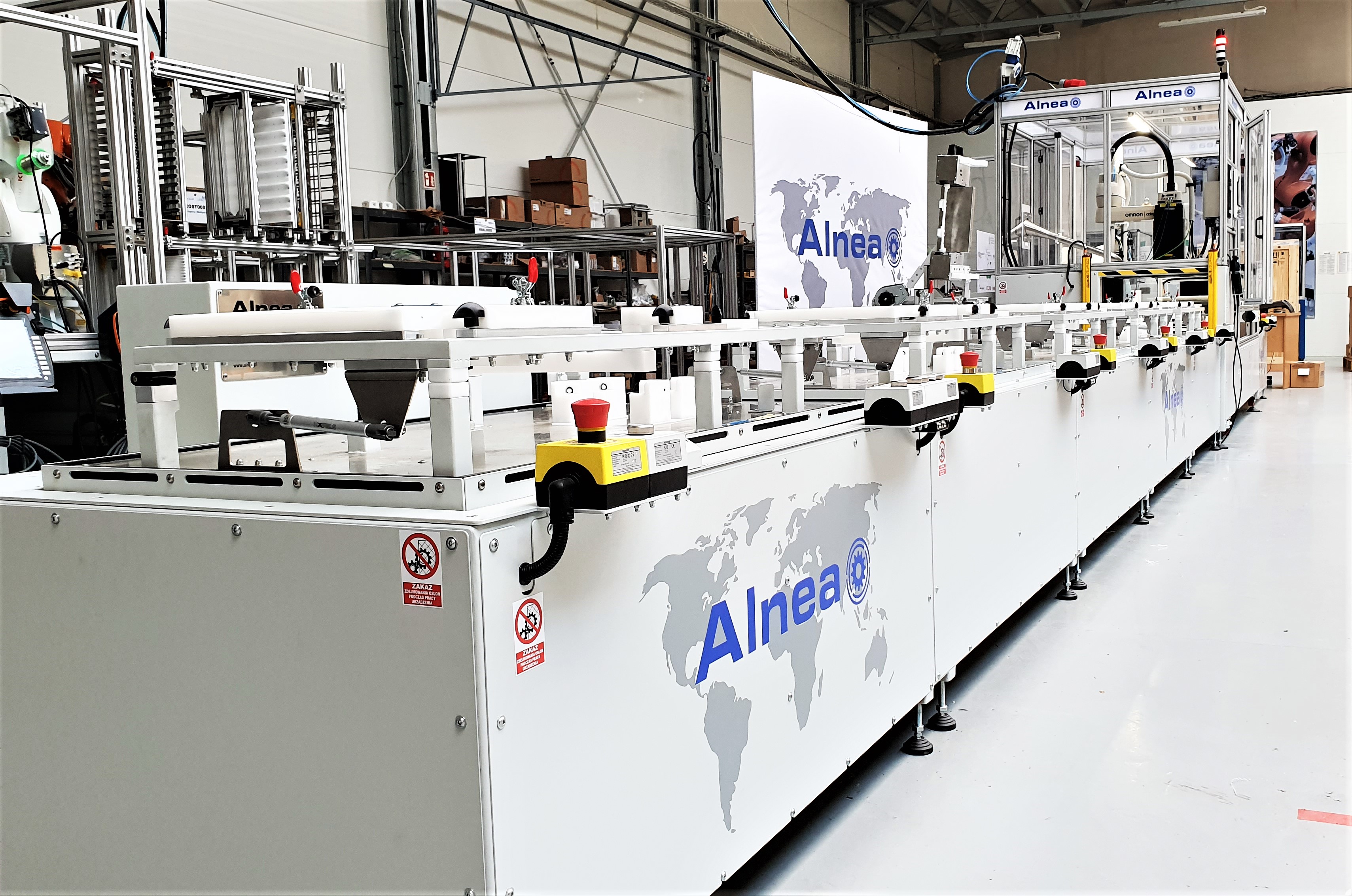 Are you wondering if automation now makes sense? You have frozen the project because you don't know if it will be profitable? Write or call us. We help you!

Alnea will help companies in crisis!

Just two months ago, today’s scenario was just as likely as a UFO landing in New York. Just two weeks ago, nobody expected the world to stand still, and people would be forced to lock themselves in homes with a supply of pasta and toilet paper. 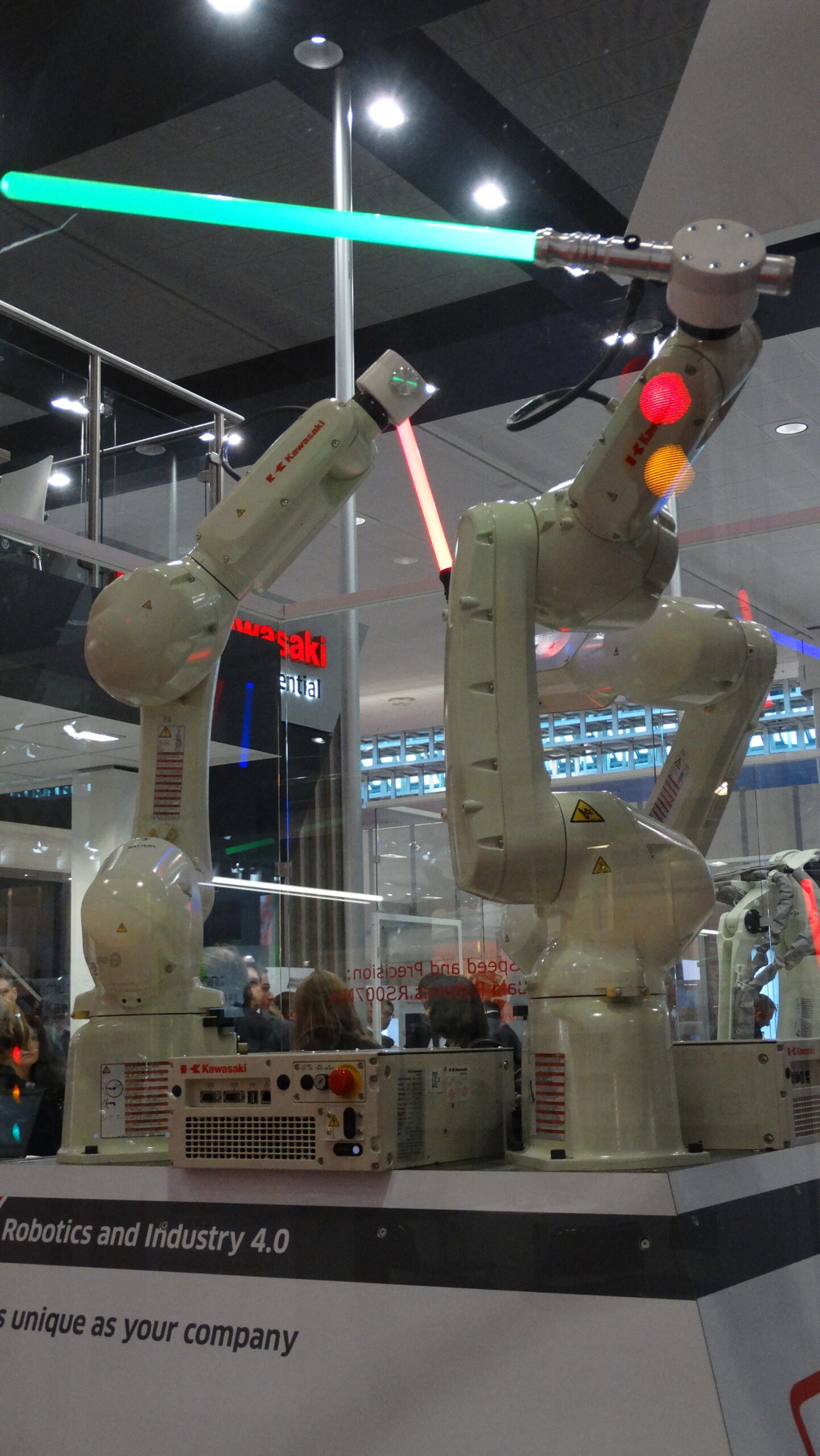 Whether the crisis will come?

The question “Will the crisis come?” I asked dr Kevin Campbell of the University of Stirling. In December, he replied that at the moment actions taken by central banks protect us against the worst, unless a kind of trigger, appears. And it appeared …

The economy is slowing down.

The economy has been slowing down for about a year – the number of automotive orders has dropped. However, this time the virus will provide us with additional impressions on the occasion of difficulties in the HoReCa, transport, tourist, service, automotive, electronics industries, basically almost everyone. Even agriculture will suffer – Germany is calling that there is nobody to collect spring gold – asparagus.

How can we help you?

At Alnea, we know how hard it will be for european companies in the near future. We plan to prepare online training courses in management and new technologies as well as implementation of innovations soon. If you would like to refresh the offer you received from us, or if you would like to consider urgent investments again – write to us. 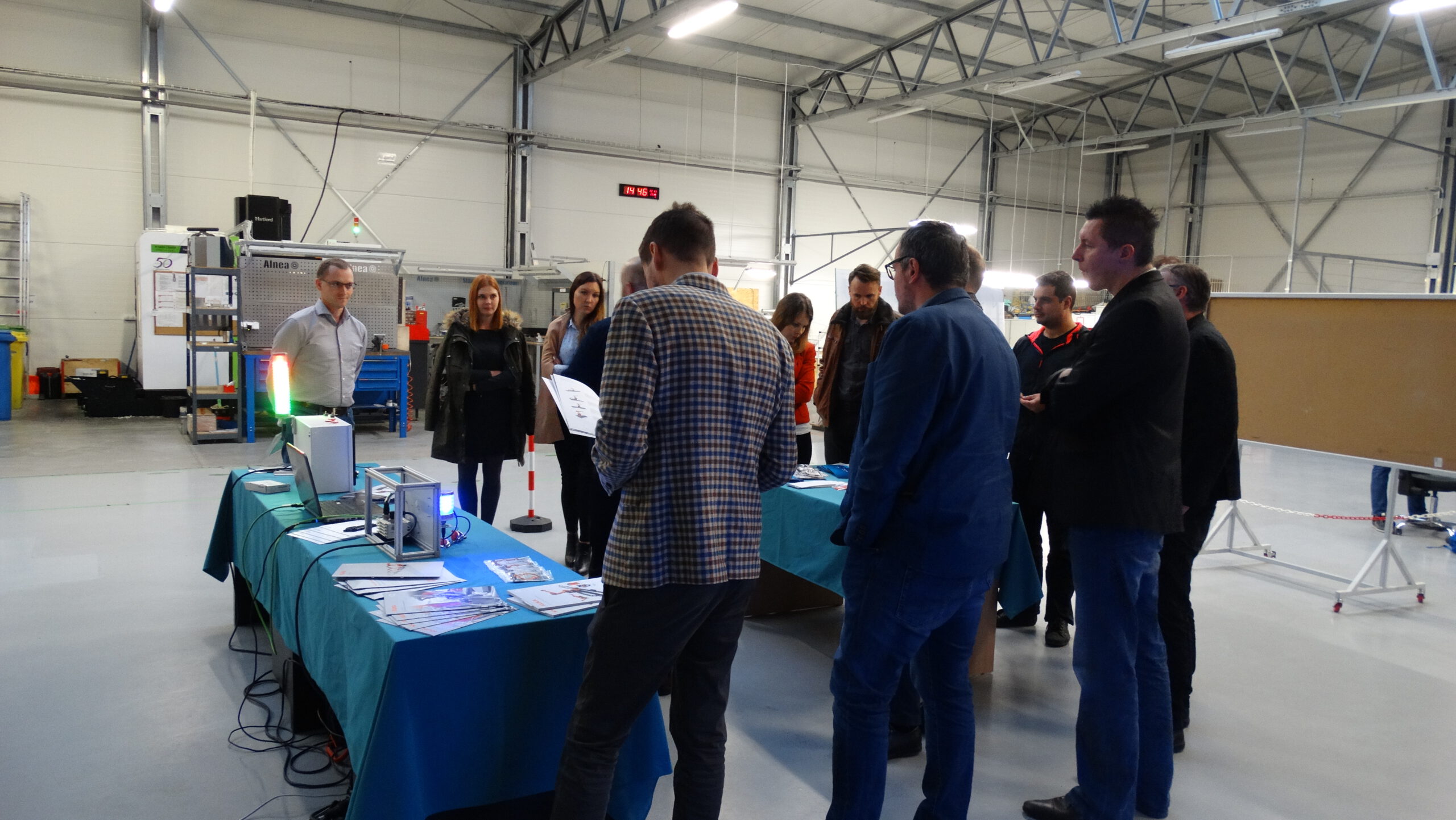 Mobile robots are recommended for the future!

Do you have a production company? Would you prefer employees not to move too much between departments? Mobile robots are recommended for the future! You can rent a robot for several months – a robot without a body (which you can do yourself) will cost you a little more than the leasing installment. You can sign a lease agreement with us and then buy the robot. This is a great opportunity and opportunity for manufacturing companies! 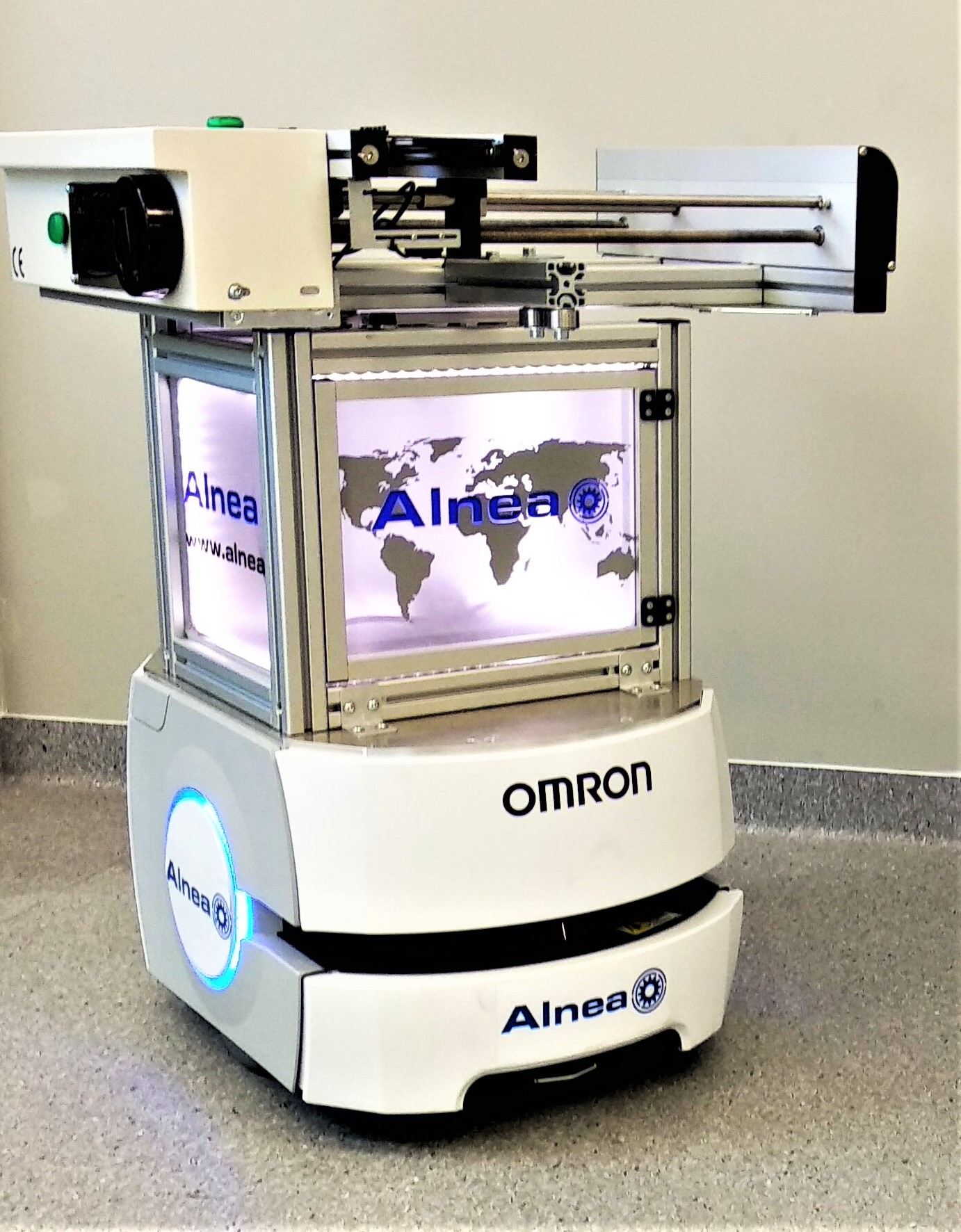 The crisis is time to change, rethink processes, supplies, opportunities and free resources. Invite us to cooperate. We have extensive experience in consulting, applications and profitability analyzes.

Robots for construction industry? Such a surprise was visible on the faces of most people who had the opportunity to see the position during the construction. The station with two robots and a conveyor is designed for riveting gutter hooks, packaging hooks in cartons and palletizing. Here is our robotic riveting station. 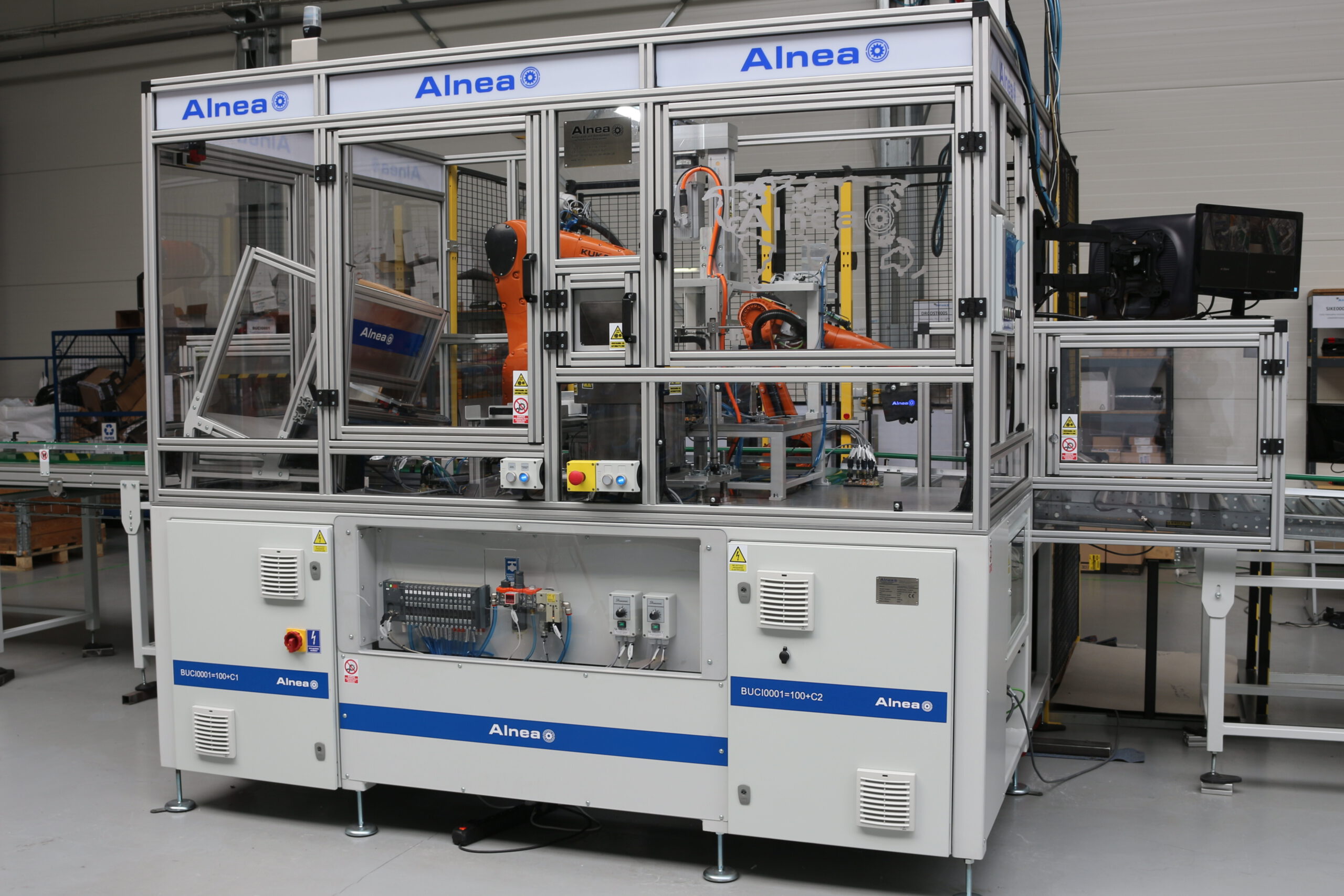 Harmony of robots and an excellent vision system. Watch how it works!

Robot KUKA has that power.

The station is equipped with a vibrating feeder and rivet positioner, which are moved to the press. The station also has a plate positioning area. The plates are completed by the operator throwing them into the litter box. The Omron vision system takes a photo and means properly arranged plates that the KUKA robot takes and positions and puts on the prepared rivet. 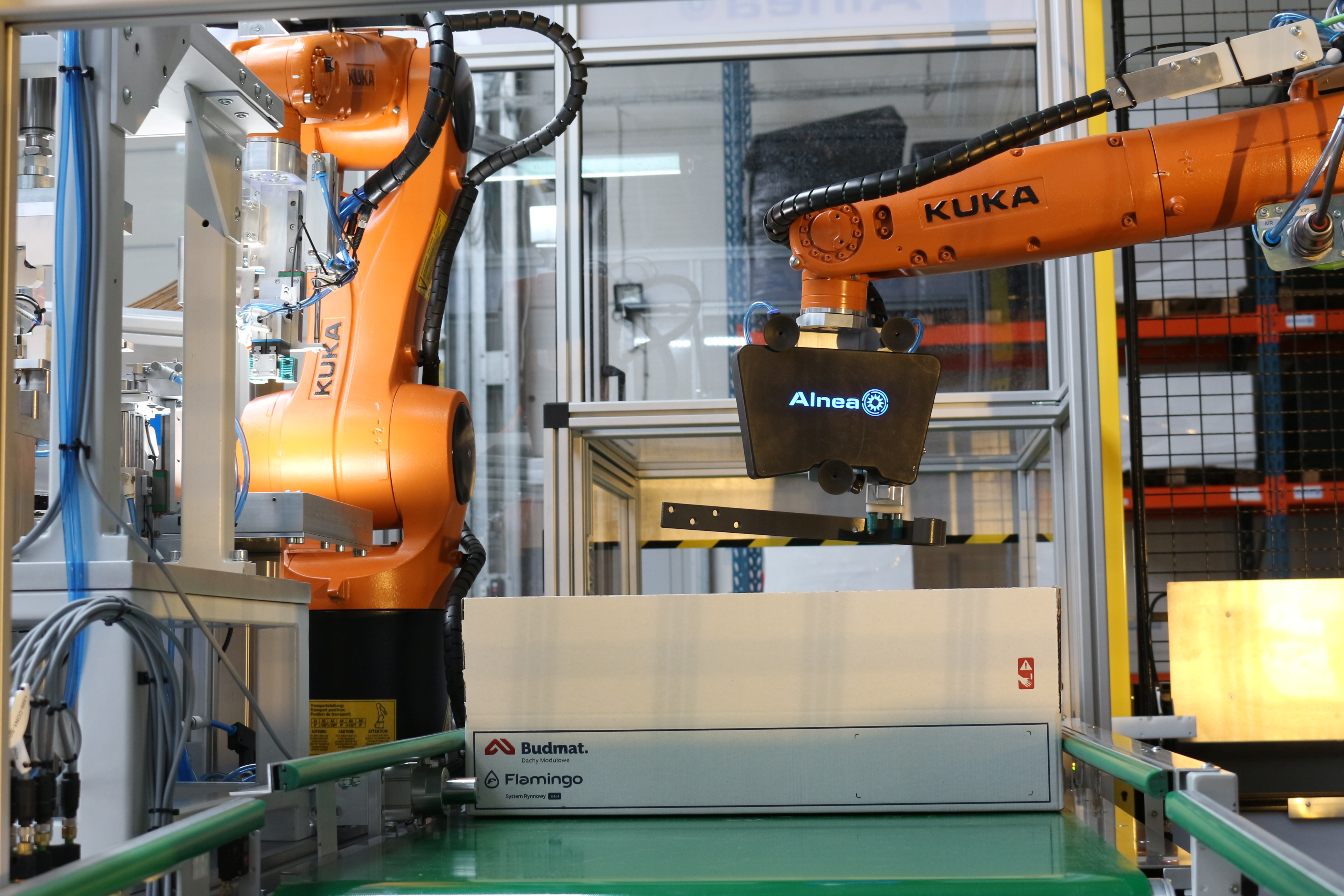 The second KUKA robot is equipped with 3D positioning system – Horus – you can read more about our vision system here. It scans one of two places prepared for pallets with hooks supplied by the operator. Appropriate algorithms facilitate picking the hook from the box without the need to position the details first. The robot translates the positioning hook before placing it in the press. This is an important process due to the large variability of hook bends and dedicated holes for rivets.
After collecting all the hooks from one layer, the robot takes a separator, removes it through a properly designed dump and starts scanning from the beginning. After selecting the hooks from the given palette, it starts the process on the second palette.

The rivet with the plate is taken by a 2-axis manipulator and then deposited on the press matrix. On the matrix, the rivet and metal plate set is held by means of a vacuum suction cup and then the hook is attached to the set by a robot. The whole is mechanically connected by means of a press and an appropriately profiled punch. 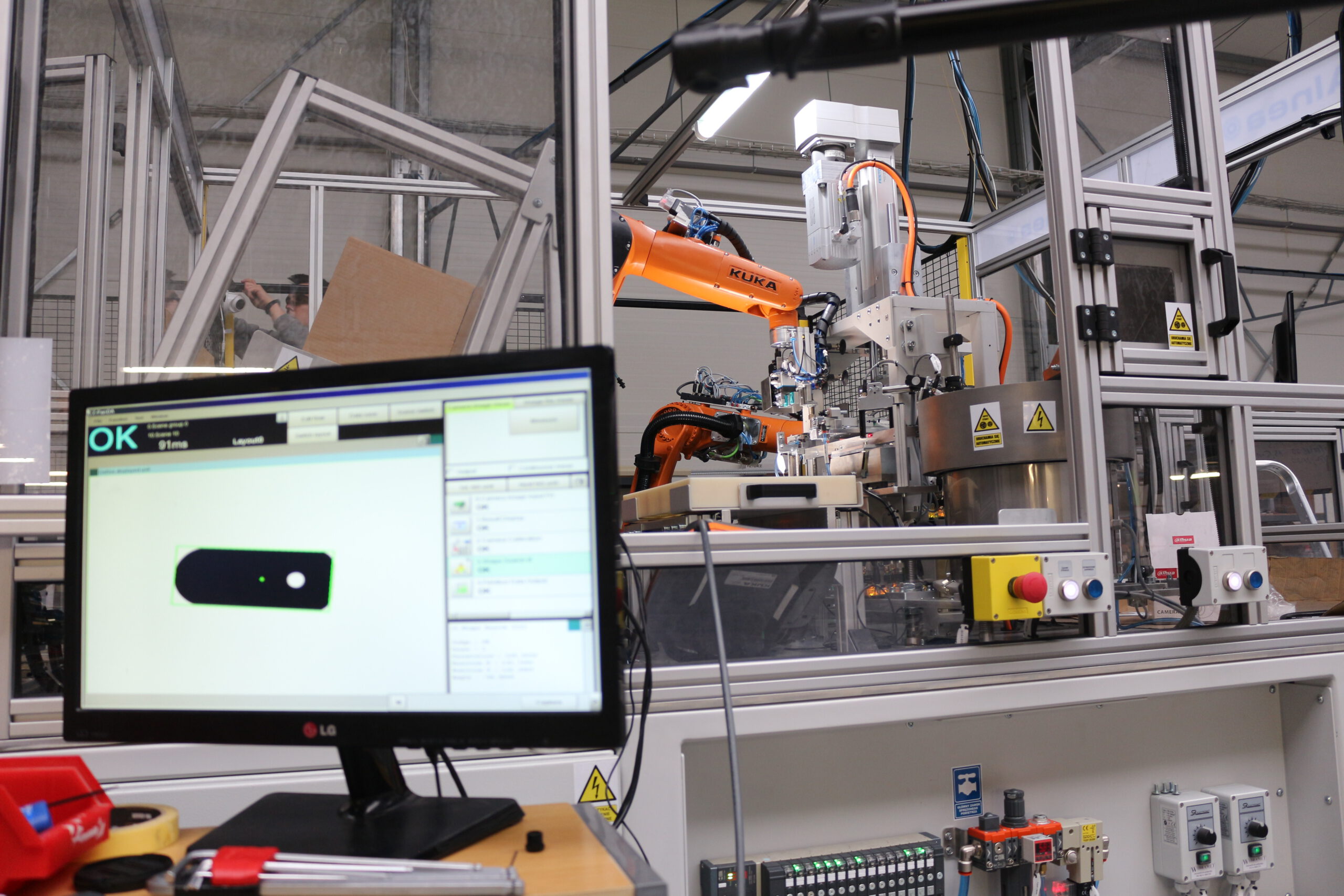 The finished hooks are inserted by the robot into cartons that differ in dimensions. The next layers of hooks are secured with cardboard spacers. The station is equipped with a feeder with appropriate presence and type detectors. 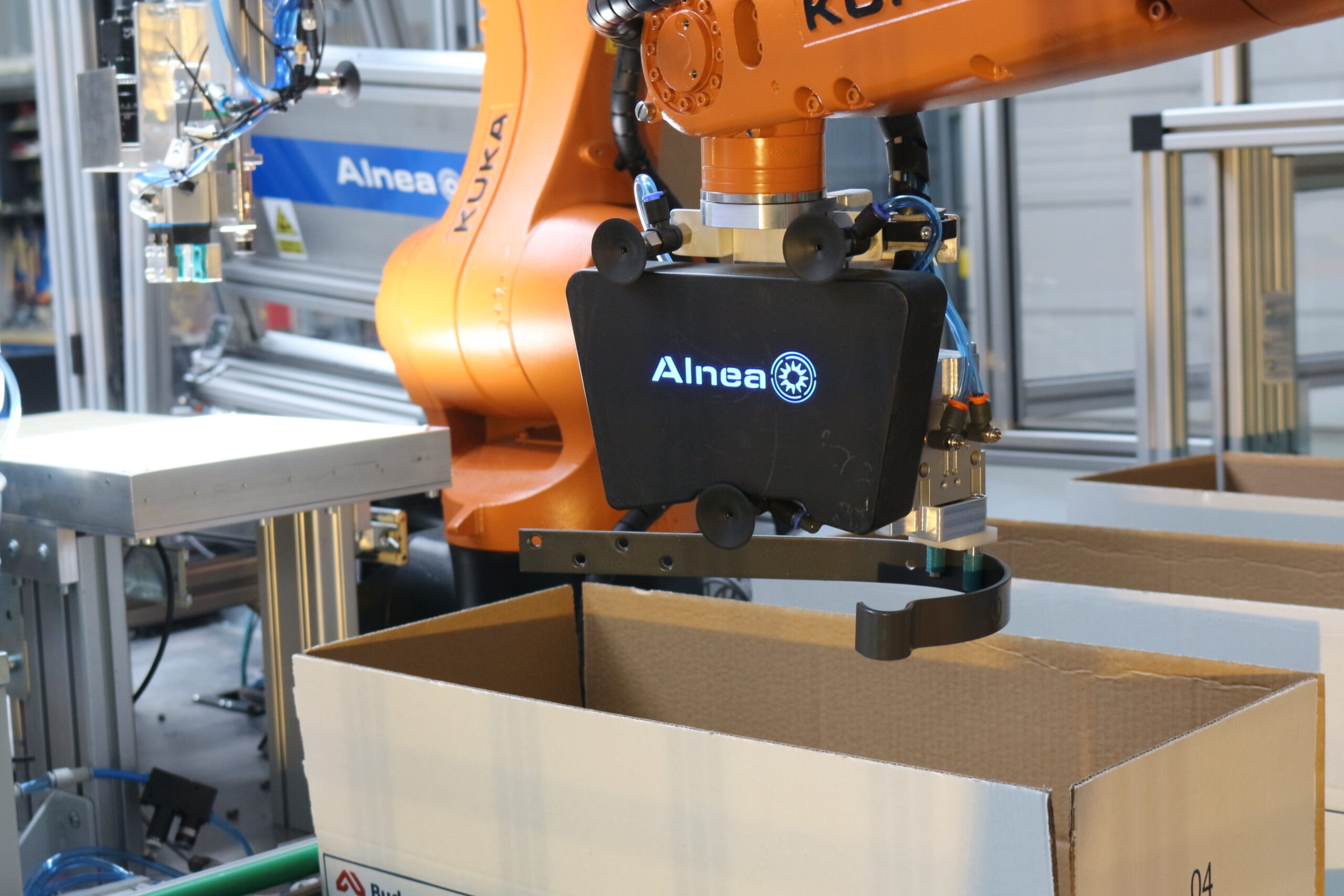 What is the role of the operator?

The role of the operator is to replenish hooks, plates, rivets, spacers and cardboard boxes. When refilling most components, open the station door. The access doors are equipped with appropriate safety jumpers. The door must be closed again by the operator. 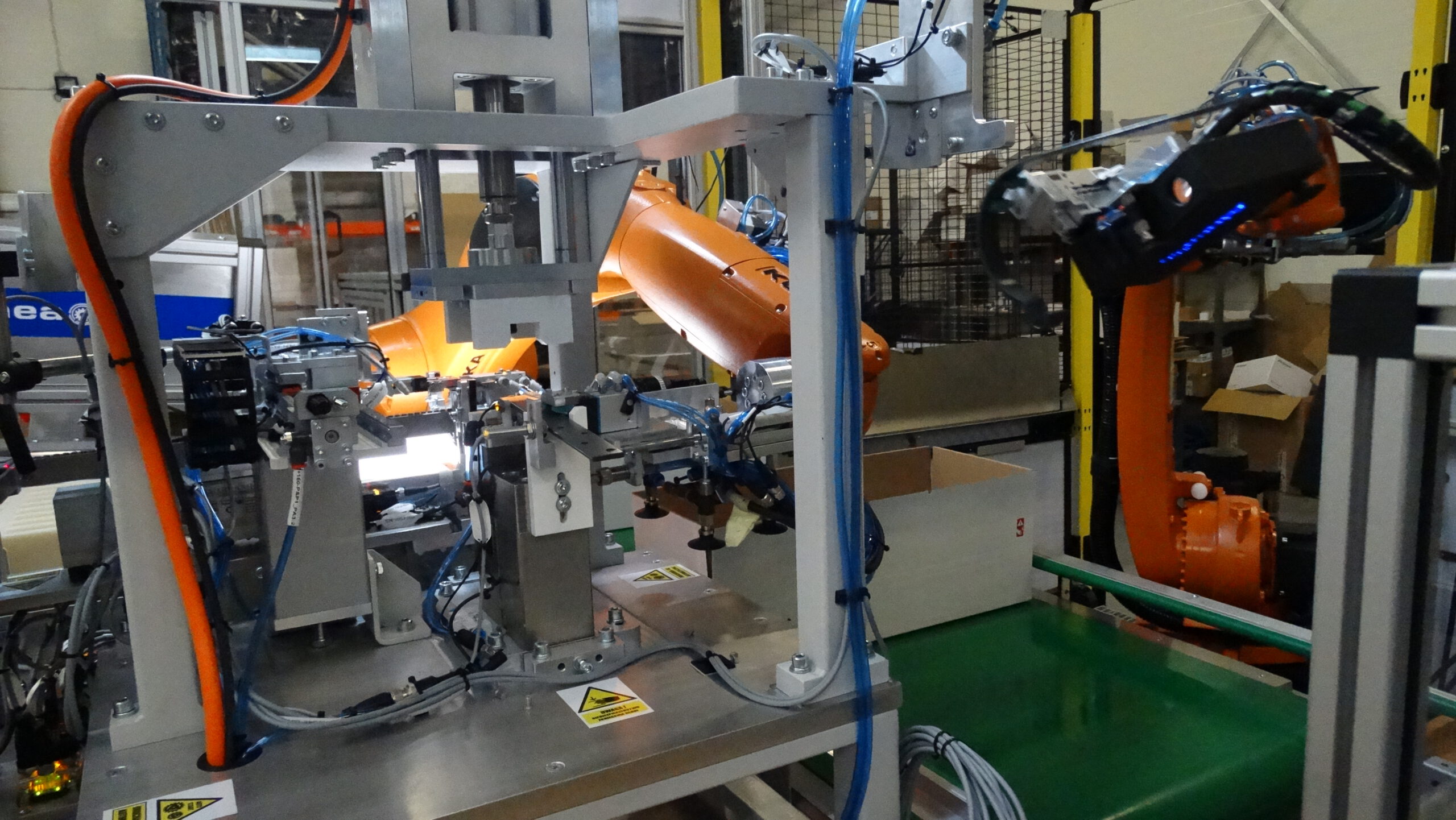 The machine can be operated via the operator panel with a clear and intuitive menu. With the help of our HMI, you can control the work of robots and machine elements in manual mode, as well as access to production statuses and user logins. 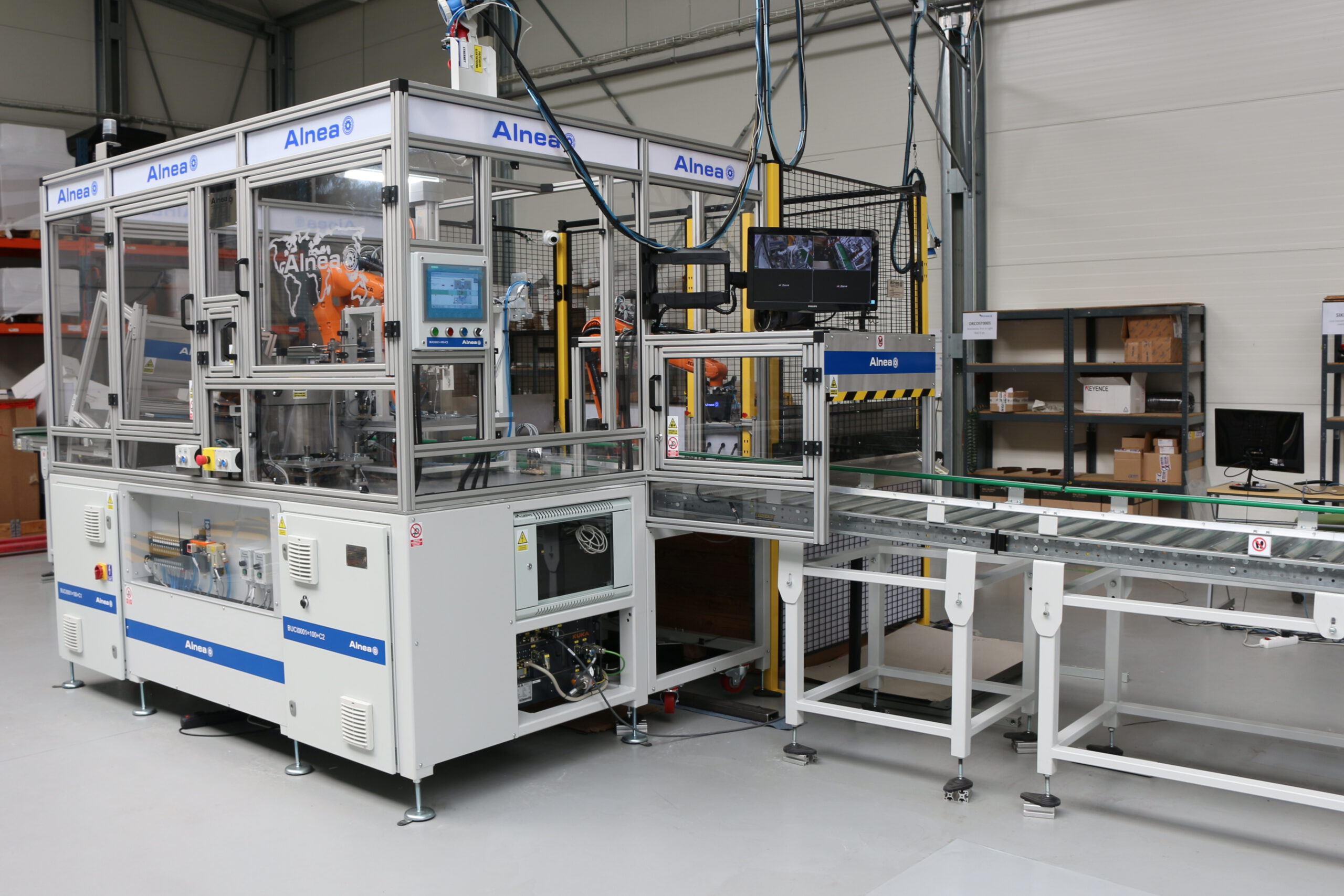 Construction industry can be also automatised! If you want to receive an offer for a robotized position - write to us! biuro@alnea.pl

Life in the shadow of coronavirus.

We are currently witnessing something that happens once every hundred years. Just a hundred years ago, a flu swept around the world plowed with World War I, which took almost 50 million lives. A wave of disease spread across the earth’s globe in 12 months. Great dramas, however, did not end with the end of the epidemic because then came the crisis that changed the world forever and at the same time was the cause of World War II. 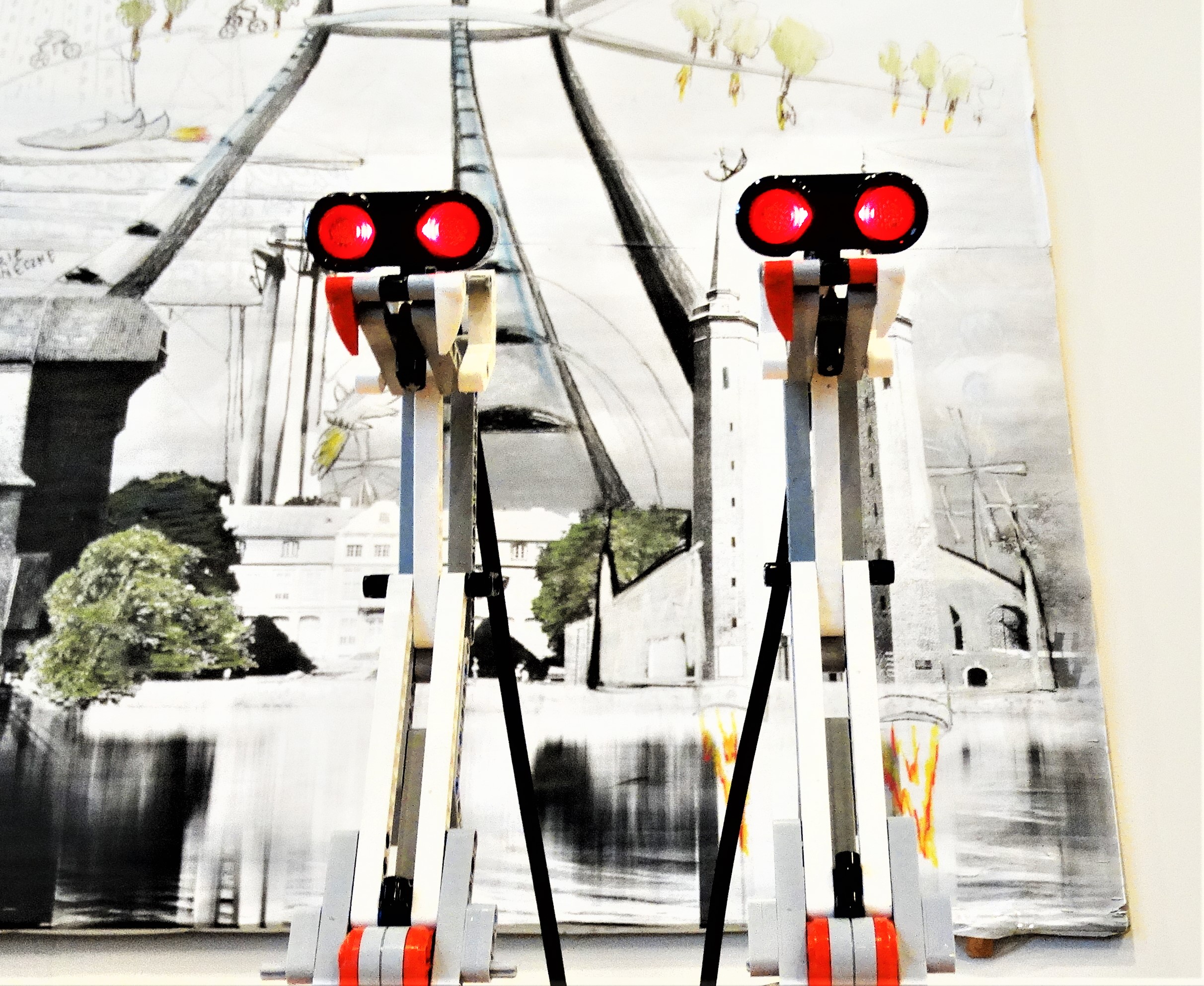 We do not know coronavirus well. Viruses are very specific at all, because sometimes they behave like living organisms – they can multiply, but basically viruses are not alive – it’s just a piece of genetic material in the lipid envelope. Such a virus is very democratic and creative. How to fight something so vicious and dead? Many will say – statistics. Purely theoretical considerations were made by Sir Patric Vallance – according to him 60-80% of the population should be infected to acquire herd immunity.

How to manage in a crisis?

Today all rulers are wondering how to manage such a crisis.
The Polish model means that everyone will lose – the rulers, the budget, employers, employees, parents and childless. The British model means sacrificing one at the expense of others. Postponing decisions means that many people will die and the economy may simply not be able to bear the burden of spending on hospitals and blocking the tourism, HoReCa and transport industries. It is better not to mention the losses after the unrest.

Everything Britain could ignore was ignored. A country struggling with Brexit, undergoing many difficulties, postpones all decisions, but at the same time is preparing a limit – 20,000 people who have died. Poland has overtaken the West (which the Union cannot forgive us) by closing its borders and introducing restrictions on the issue of people gathering. Germany closes schools, pubs and cultural facilities almost a week after us. But you can understand it – it is the fourth economy in the world that has huge foreign reserves. He can handle capital and good organization. Italy is in the top ten in terms of the economy, but no specific decisions.

It is difficult to predict what awaits us in the near future. Perhaps the epidemiological situation is a small fall that will cause six-month chaos, but the situation will normalize. Yes, maybe if we can handle the virus in 2-3 months with sensible internal and fiscal policy. However, if the downtime lasts longer than 3 months, we may face a serious crisis. 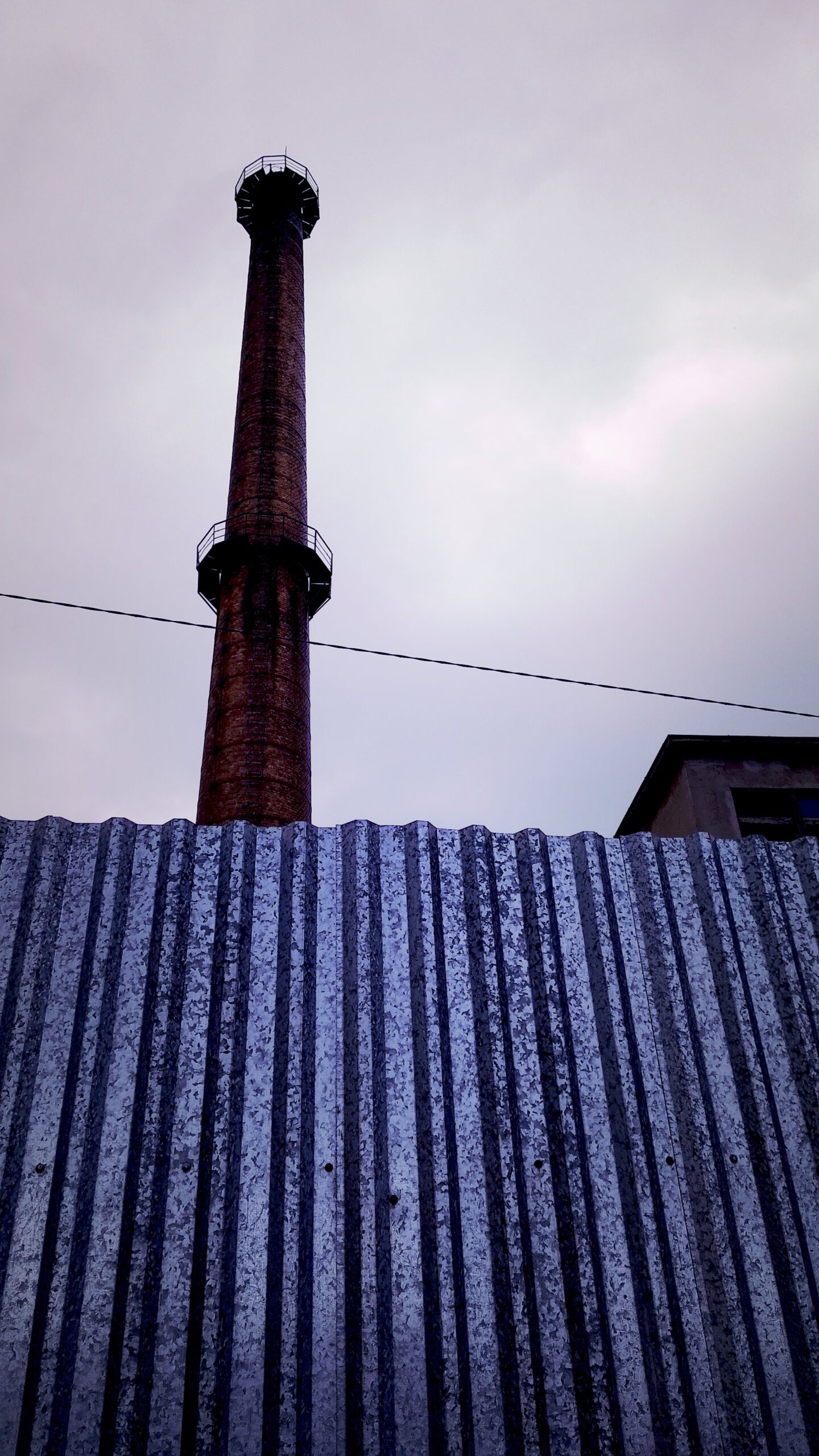 It is a bit like managing a company in state management. There is always the problem of making decisions and bearing the consequences. Sometimes we are irritated by the lack of independence of employees and the lack of making difficult decisions for fear of consequences. However, these universal fears can be seen regardless of the size of the organization and the position held.

Everyone will have to sacrifice something in these difficult times. Let's support each other!

If you would like to receive a new or refresh the old offer for a difficult time of crisis
write to us as soon as possible: biuro@alnea.pl

Our robot soldering kit is of great interest abroad. Thanks to KUKA’s support, our offer goes to min. to the Czech Republic, Hungary, Brazil, France and Germany. Automated soldering also supports our 3D positioning system for six-axis robots – Horus. You can read about its possibilities HERE. 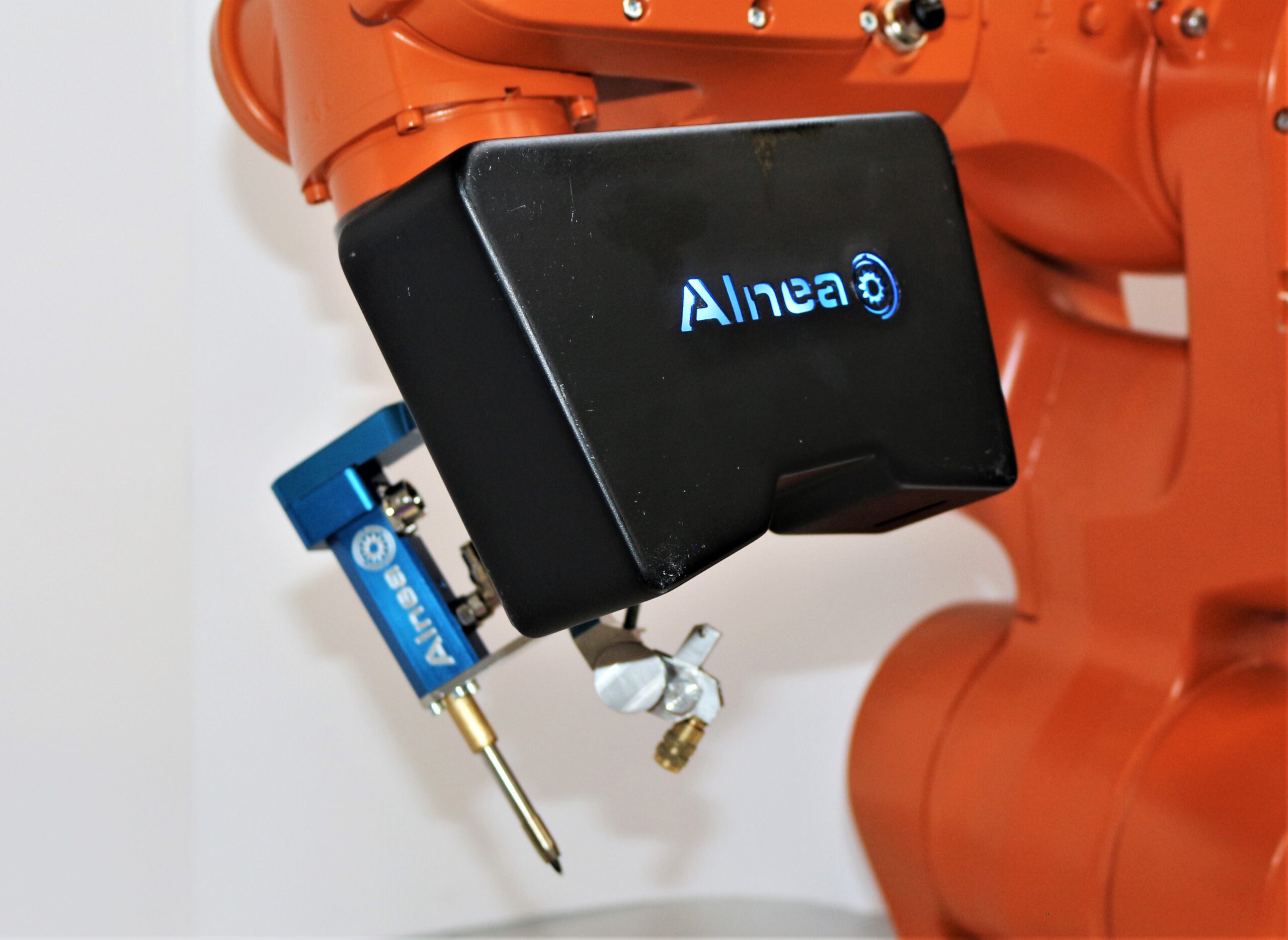 In Alnea, we know how important research and development are. We want our applications to be precise, tailored to the needs of the recipient, give real savings and stabilize the soldering process.

We are pleased to inform you that we are still developing our product and that the new head with cushioning has its premiere. Excellent precision, accuracy and process control are the features of our Zeus set. The ergonomic head, precise tin feeder and advanced soldering controller with the ability to set multiple profiles are the best set at an affordable price. If you have a critical process that requires excellent repeatability – contact us. 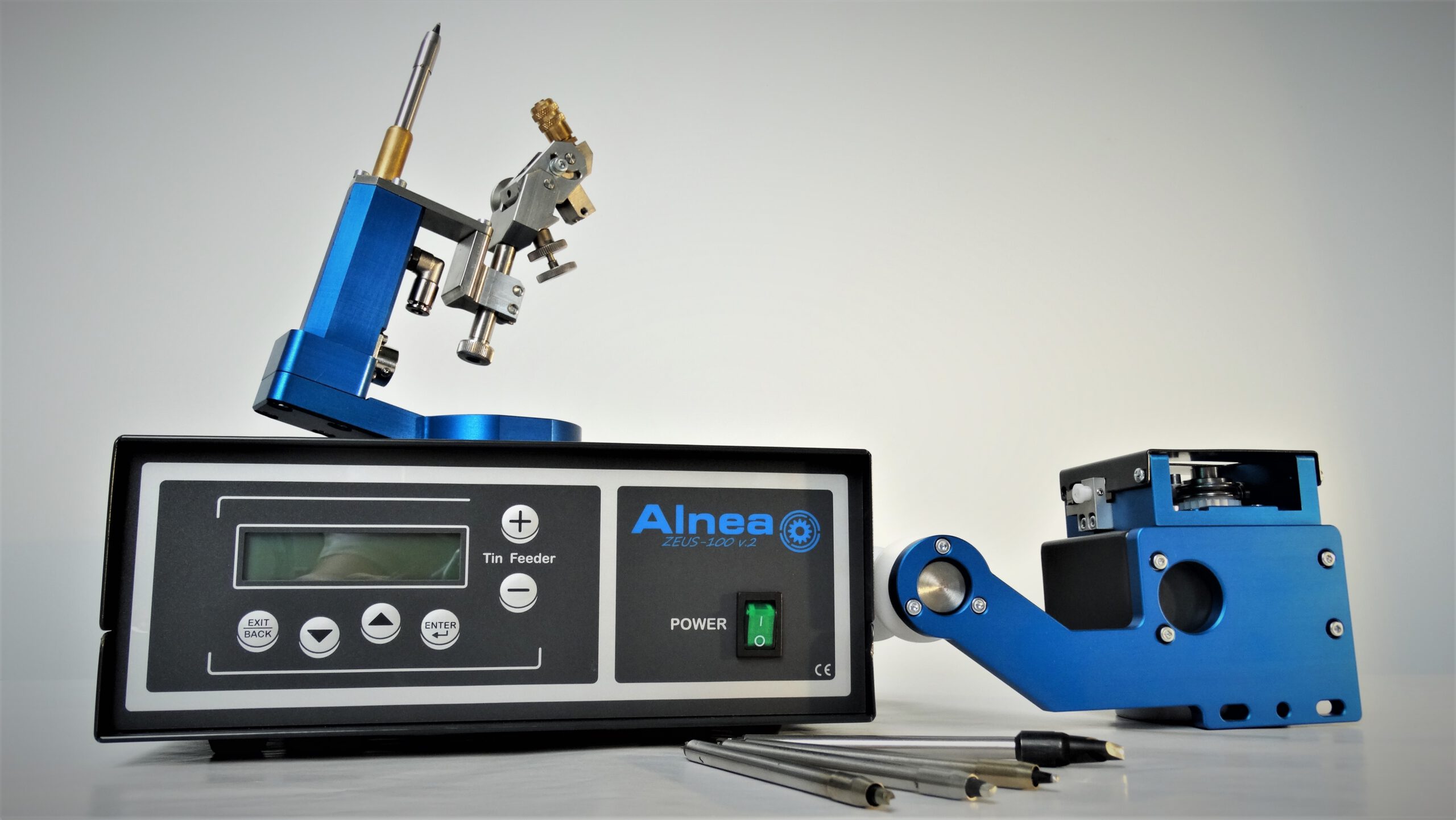